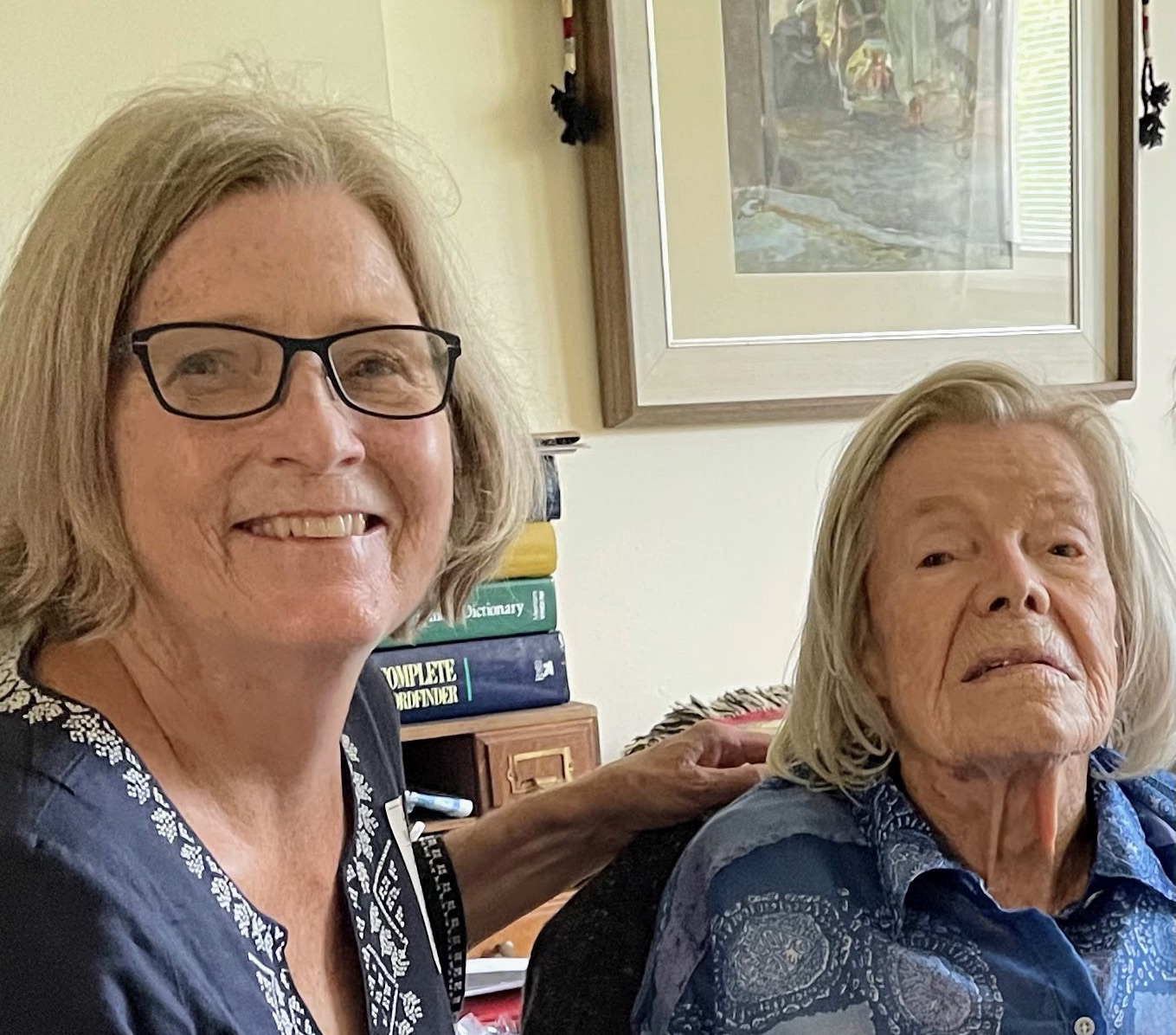 As I made plans to visit Grand Rapids for my 50th class reunion, I decided to reach out to a woman who had been part of an indelible childhood memory: Anita Gilleo. “I’m 198 years old,” she said on the phone when I called. I smiled and thought, “she means 98 - but she’s sharp as a tack” as we made plans to meet.

We shared our first name, Anita, so even as a very young child growing up on Alten Street, I was aware of Anita. I remembered her in the 1950s: pedaling her wide tire bike up our block from Fulton towards Lyon. She was a vision, wearing jewel tones of purple, gold, magenta, big sunglasses, and a wild headscarf. Anita laughed when I told her about my memory of her and said, “Well, I am the granddaughter of an artist, you know.” Yes, as children we all knew about Mathias Alten, who had lived in the big white house on the corner of Alten Street, 1593 East Fulton, before the houses in our neighborhood were built. The Alten home with a carriage house, small cottage, and beautiful yard with hollyhocks, roses, and delphiniums, had anchored the Stacey farm and orchard before being platted and developed. Mathias J. Alten home and studio.

Years later, I learned Mathias Alten came with his parents from Germany in 1889 (when he was 17) where they lived on the west side of Grand Rapids. A few years later, with support from his wife’s family, Mathias and wife Bertha operated a wallpaper, paint and artist supply store. He trained as a fine painter and achieved popular success and critical acclaim. Alten’s naturalistic scenes often featured his wife, daughters, and flowers from their garden. Notable works have been on view at Spectrum Health Butterworth Hospital for many years. Alten worked and painted major works in Spain, California, and New England, very different from Western Michigan settings such as Reeds Lake, field and farm scenes, and Lake Michigan. Through his decades of artistic development and international travel, he often highlighted working animals and working people.

I was happy to find out that public appreciation for Mathias Alten’s work continues to grow. The extensive personal collection of George and Barbara Gordon moved to the Grand Valley State University Robert C. Pew Center, 401 Fulton St. West, and is enhanced by family photographs, letters, and personal items given by Anita, her sisters, and others. About Mathias J. Alten at GVSU.

While in Grand Rapids, I visited Nathan Kemler, director of the GVSU galleries and collections. Kemler enthusiastically talked about Mathias Alten’s professional distinctions, pointed out several gifts from Anita Gilleo and the family, and described a new project in the works: a life- sized bronze sculpture of Mathias Alten and accompanying phone app that will enable visitors to converse with him.

When I met Anita at her residence later, she vividly and fondly described her grandfather: always with his hat and paint brushes and frequently painting with a cigar in his mouth. She has provided input on the preliminary design for the Alten bronze and continues to work closely with Kemler and the sculptor, Brett Grill. Anita recently noted there were no Alten beach scenes on exhibit and gave GVSU several pieces set in the dunes at Lake Michigan.

Anita’s vitality and robustness are evident as she repeats, “You know, I’m 198 years old!” This time I saw her sly smile and got the joke. The years mean nothing to this fully-charged woman. Through a warm and casual conversation, I shared my memories and caught glimpses of her extraordinary life.

Anita said, “it’s no surprise you remember me on my bicycle. You know, I rode my bike everywhere and never owned a car. I rode my bike through 40 countries!” Indeed, when she
was over 75 years old, she rode with Odyssey 2000, a bicycle trek around the world to celebrate the millennium. They camped and rarely had a bed to sleep for the many months on the road. The Grand Rapids Public Museum has a number of her items from that trip including the bike she rode and map of the tour.

I told her about our 50 th class reunion from Central High School. She also went to Central, Class of 1940. The CHS building we attended opened in 1911 at 421 Fountain St. N.E. I wanted to hear about her activities at Central, so Anita recounted working to become eligible for a club (possibly Agona or Girls Athletic Association.) She had a friend who was a “big strapping girl who excelled at all sports.” Anita, on the other hand was not good at anything but needed to play a sport in order to be eligible for the club, so her friend decided “our signature sport would be badminton.” They played on the badminton team, and she made the club.

Although Anita never owned a car, she somehow managed to have four foreign driver licenses. I learned she had worked for the Army Corps of Engineers in Morocco and Spain followed by positions with the United States Armed Forces Institute in Germany and Vietnam, where she spent two years. Earlier, while at the University of Michigan, she lived at Martha Cook residence hall and earned a B.A. in 1944. With her degree in English, she went to work in Washington, D.C. for the American Chemical Society before her international adventures. Anita briefly mentioned her advanced degrees: a master’s in Middle Eastern Studies from the American University of Beirut and a doctorate in Political Science from Idaho State University.

Anita is a citizen of the world and is comfortable in almost any environment as she continues to secure the legacy of her grandfather, Mathias Alten. With strong roots in Grand Rapids, members of this accomplished family branched out to make a difference in the world.

Author's note: My thanks to Julie (Esenwein) Zinderman for sharing this adventure and so many more. Friends since 1956, classmates at Hillcrest and Central, we are Best Friends Forever.

or
Please check your e-mail for a link to activate your account.